Working the Streets in Bangkok 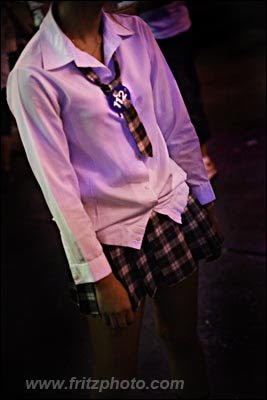 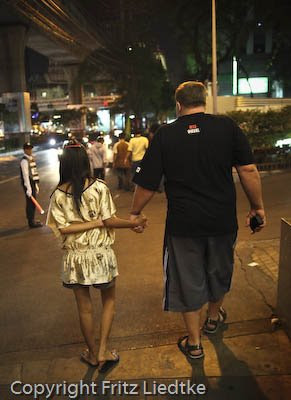 I’ve been in Bangkok for 4 days. Never have I seen a city quite like this. Over 12 million people, in a sprawling metropolis right out of Bladerunner. I’ve walked through hovels and massive malls, taken tuk-tuks and SkyRail, eaten from street vendors (now that I know what they’re selling) and Starbucks (a Tazo from Portland), walked in the golden smog-filtered sunlight and the neon-lit night, among Christians in skirts and prostitutes in bikinis.

Every night I’ve been out shooting for various assignments, all related to the sex trade in some way.

I’ve been staying with my dear friends Iven and Kashmira. I photographed their wedding several years ago in Seattle, and they must have 50 photographs on their walls from their wedding. (Plus a constantly revolving slideshow on their laptop. ) Considering their triangular apartment in Bangkok is about 150 square feet, that’s one photo for every 3 square feet of apartment. Surely that’s the highest ratio of photo-to-square-feet of any customer I’ve ever had. I should give them an award of some sort; maybe some new pictures. 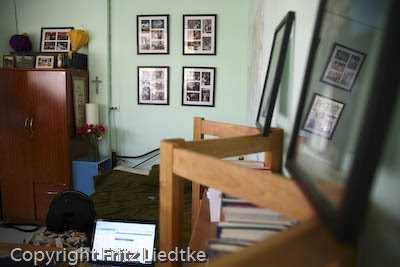 And that’s just what I’m going to do. I’ve been photographing some things for them, and for others, in support of their work. These people–both foreigners and Thais–are working to offer people in the sex industry some hope of a way out. They build relationships, slowly, and look for opportunities to help. It’s both intimidating and amazing to walk the streets with these people, and watch them approach these men and women with smiles and conversation. And cookies. The other night I was out with about 50 people, singing Christmas carols and offering home-made cookies to men working in the bars and clubs. Their response was frequently moving. We were greeted with smiles (and a few tears), and several men told us they’d never had anything like this happen to them.

Another evening we were out photographing images for a woman who runs a home for females wanting a way out of the sex industry. Oftentimes, she explained, these girls are fourth or fifth generation prostitutes, and don’t know anything else. Often they are forced into the work by cultural expectations (as I mentioned in a previous post, they are obligated to help support their family, or to pay for their brothers to go to school). So this woman goes into bars regularly, gets to know the girls, and offers them a way out. They help them go to school, get vocational training, etc.

As I’ve worked and met people the last couple of weeks, I’ve frequently wished someone would go and make a book, telling the stories of these men and women on the streets (similar to what I’ve done with Skeleton in the Closet, telling the stories of people struggling with eating disorders). On the street they are numbers, toys. With a story, they are real people, to be respected and cherished.

That’s a brief overview of my work here. I head back to Phnom Penh later today for another day and a half, and then home. I wish I could pack some sunshine with me when I return home to snow and ice.

All photographs and content is Copyright Fritz Liedtke. Please do not copy or re-use them. To do so is a violation of federal copyright law, and will be prosecuted.
« Pimps, Prostitutes, and Drug Dealers
Animals of Bangkok »