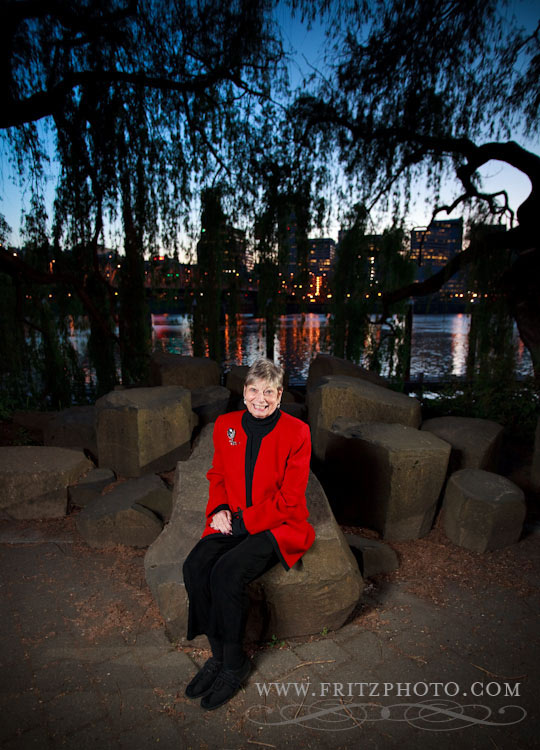 Vera Katz stepped out of the car, and I introduced myself.

And so began my portrait session with former Portland Mayor Vera Katz.

It might be her impatience that made her so effective as mayor.  Serving as Mayor of Portland for 12 years, Vera accomplished many things which have helped make Portland the creative and conscientious center that it is.

In 2005, she was awarded the Ron Schmidt Leadership Award by Oregon Governor Ted Kulongoski.  In giving her the award, the Governor had this to say about Katz:

The list of Vera Katz’s accomplishments in support of the arts and culture is extensive. Long before becoming Mayor, Katz served a distinguished 10 terms in the Oregon Legislature, where she was a founder of Oregon’s Percent for Art Program. That same dedication to the legacy of Oregon’s public spaces and art-rich neighborhoods is evident throughout her leadership. Mayor Katz also has provided vision for significant assets to Portland’s cultural life — from the Classical Chinese Garden to recent public art gifts from Xi’an, China and Guadalajara, Mexico.

As Mayor she secured special and substantial appropriations for The Portland Opera, Art Museum, Oregon Ballet Theatre, and Oregon Symphony, emphasizing community outreach efforts, such as Symphony in the Parks and OBT Exposed. She led the City Council in its support for Portland Center Stage’s armory rehabilitation. Most recently, Mayor Katz has been a champion for Portland’s rapidly growing ‘creative class’. She established a grant program to jump-start emerging careers; initiated the new Design Festival; and garnered special support for Portland Institute for Contemporary Art’s TBA Festival.

In her final weeks of office, Mayor Katz proposed a bold amendment to the City’s Sign code, which, with the concurrence of City Council, has enabled murals once again to flourish in Portland. With such dedication to beautified public spaces, it is fitting that among the many ‘thank you’s’ that the Mayor received upon leaving office, one notable surprise was a public art installation inspired by a work she had been impressed by on a visit to Venice, Italy.

Mayor Katz has spent her life and career in Oregon imagining our state as a center of forward-thinking creative minds and creative spaces. To all of our benefit, she has accomplished so many of her goals.

For many of the same reasons, Pacific Northwest College of Art just awarded Katz their first annual Civic Imagination Award.  At PNCA’s Centennial Gala, President Tom Manley presented the award to “the Honorable Vera Katz, Mayor of the City of Portland from 1992 to 2004. The award recognizes Mrs. Katz’s instrumental role in shaping Portland’s civic and cultural landscape.”

I was asked by PNCA to create a portrait of Vera for the Civic Imagination Award.  Beginning this Centennial year, PNCA will be awarding such an honor annually, with the intention that at their 200 year anniversary they will have a collection of 100 portraits of this kind.

In order to capture Mayor Katz in a way that would represent her part in helping Portland’s ‘civic imagination’ to flourish, I chose a location with her name on it.  The Vera Katz Eastbank Esplanade graces the east bank of the Willamette River, directly across from downtown Portland, and is one of my favorite outdoor locations in town to walk, bike watch, and photograph.

It is also one of the finest places in town to create outdoor portraits, and any good location portrait photographer in Portland knows it.  From river and city skyline views, to bridges, boulders, and trees, it encapsulates in a small space a wide variety of beautiful locations.

As we walked over to this location together, Vera pointed to the tree on the right and said, “I had to fight for that tree!”  We asked her what she meant, and she explained, “They wanted to cut down that tree when they were building the esplanade, and I wouldn’t let them!”

For that, Mayor Katz, I thank you.