Pooed and Pawed by a Capucin Monkey

The other day, while photographing in a Nicaraguan cigar factory, I noticed in the courtyard several cages containing exotic animals.  One contained a cat of some sort, perhaps a lynx or bobcat, pacing his 4-foot square cage.  Another contained several parrots.  And the third contained 2 capucin monkeys.

Monkeys are pretty cute creatures, and strangely familiar.  When they came up to the wire mesh and looked right at me, they were peculiarly sad looking creatures; I felt bad for them.

I pulled up my camera and started to photograph, and the monkey started squawking at me, and bounded away to the other side of the cage.  I put the camera down, and he returned.  Again, I hoisted my camera, and he made a face at me, squawked, and jumped away.  Nonetheless, I kept photographing, and a moment later he bounded toward me and threw something at me, hitting my hand and camera.  I thought it was a piece of food or a nut, and thought nothing of it, and continued to photograph.

My wife, who was standing nearby, called out, “He just threw poop at you!”

“No,” she said, “capucins throw poop.”  She pointed at the clod on the ground below me, saying, “And there it is.”

Well, there was nothing for it but to continue shooting.  I went around to the far corner and continued to photograph the monkeys.  I tend to like to be as close to my subjects as possible, and wouldn’t you know it, the little guy reached through the cage and swatted my lens!  He did so two more times as I continued to photograph.

I can honestly say I’ve never had anyone express their discomfort with having their picture taken as brazenly as this little guy.  Pooed and pawed in the course of two minutes.  What a day.

I love being a photographer. 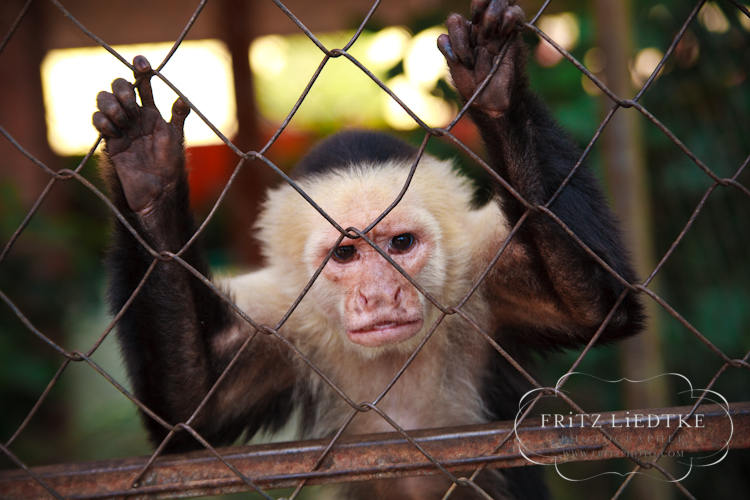