Forest Nymphs, as Featured in Oregon Bride Magazine’s Best Photos of the Year 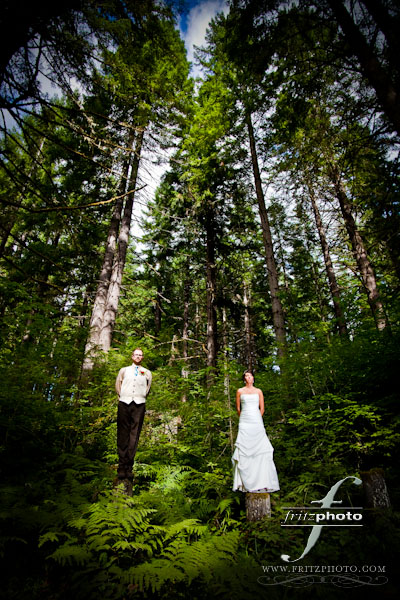 The current issue of Oregon Bride Magazine features several of our wedding photographs.  One of them is featured in the Best Wedding Photos of the Year section, and this is the story behind the photograph:

Dayn and Mandi are a very creative, fun-loving couple. They held their wedding in a county park outside of Portland, and it was one of the most beautiful affairs I’ve ever seen.  (You can read more about Dayn and Mandi’s wedding on our blog here and here.)

As we were creating their portraits, we walked past this spot in the trees that included several stumps sticking up out of the brush. I’m always looking for something creative, unique, or different to do with portraits, so I asked if they’d be willing to stand on the stumps for some photos, and they gladly agreed. I wanted it to appear as if they were trees as well, or forest nymphs.  (Did you know that the Greek word νύμφη (nymph) has “bride” and “veiled” among its meanings: hence a marriageable young woman?)   So Aisha and I helped Mandi up on her stump (in her heels!), and Dayn climbed up on the other.

Sunlight was hitting Dayn directly, so I had Aisha light Mandi with a flash to even out the lighting. I photographed the scene using a very wide-angle lens, in order to show the grandeur of the tall fir forest. And, voila!, a couple of forest nymphs on their wedding day.