Alberto Gutierrez could be called many things: hermit, farmer, eccentric, recluse, sculptor, folk artist, walking piece of history, national treasure.  I don’t know that all of these would be accurate descriptions, but I do know this: he is a talkative, friendly fellow, who loves art, loves poetry, and loves his property in Cerro Jalacate, in the hills of Tisey.

Tisey, Nicaragua, is a Reserva Natural, near Esteli, in the North.  It’s an area encompassing 9,344 hectares of mountains and valleys, trees and rivers, and farms and farming coops.

Our friend and guide, Carlos, took us on a day-long trek through part of the Reserva, beginning with breakfast at a coop where they grow organic vegetables with organic fertilizer made from the waste of the organically fed cows and goats, which produce organic milk, from which they make swiss-style cheese.  From there we made the several-kilometer trek to Alberto’s farm, on the side of one of the hills, where he lives with his siblings on their family farm, where he was born in 1944.  Growing coffee, tropical fruits, and other comestibles, they live off of what they grow, and sell the excess for income. 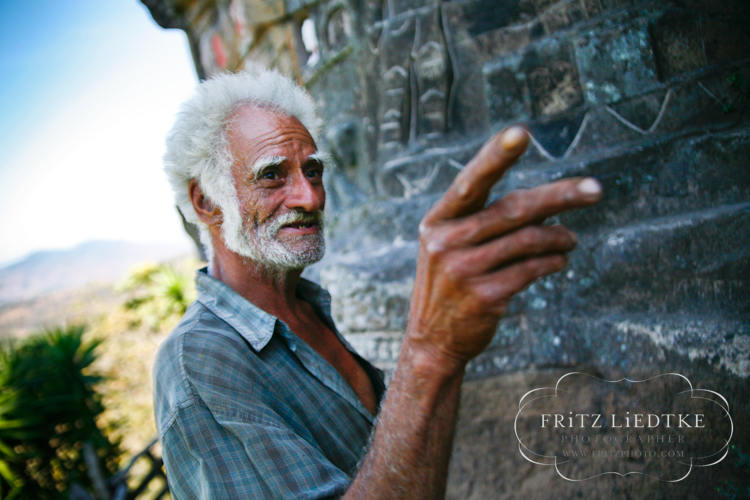 Alberto is an interesting character, and happy to show people around his property.  When we first arrived, he asked us to sign in to his guestbook, which he produced from a shed where he stores coffee and tools.  He told us he’d had over a thousand people visit over the years, and he had their names and dates and countries of origin there in the pages of his books.

After signing in, he invited us to follow him through the hillside covered with coffee bushes, and trees producing orange, lemons, bananas of four different colors, and tiny pineapples.  He told us of the animals that used to live in the forests, such as monkeys and cats, that no longer were around.  Now, he said, there are just squirrels, which eat the oranges on occasion.

We walked along the paths sculpted from the dirt and rock, carved into stairs with wooden handrails, as he began to point out stones that he’d carved into different shapes along the way.  As we proceeded, the side of the path turned more and more to large rock outcroppings, into which he’d carved animals, churches, faces, maps of Nicaragua.  He pointed out the Twin Towers of New York, the cathedral in Esteli, the boats of Christopher Columbus, the cross of Christ.  In some places he’d carved stairs, and in others, benches to sit and enjoy the view of the valley below.  To some sculptures he’d added color, either by paint, or by the color of the stones themselves, pink and gray and white.

I asked him how he made the carvings, and from a niche he’d carved into the rock he pulled two sharpened pieces of rebar, a knife-like blade, and a stone hammer.  He said he’d been using the same tools (except for the stone, which had to be replaced when it broke) for most of his sculpting life.  He showed us the fresh lines he’d carved into the various murals, in his annual fight against fungus, dirt, and decay.

As we proceeded along the face of the hillside, the stone face became taller, the edge beside us steeper, and the themes larger and more colorful.  When we stopped to sit and talk further, we did so at a creche that Alberto had carved from the rock, painted with blue and white paint, complete with the nativity scene and the star of Bethlethem.  Here we sat and rested, while he quoted us poetry from Latin American poets, songs, and some poems of his own.

As we returned along the hillside, he pointed out a lichen-covered Atlas, whom he’d sculpted holding the mountain itself on his back.  It made me wonder who, after Alberto is gone, will uphold the fragile beauty of his fantastical sculptures, hewn into the very bedrock of his country, riddled by wars and revolutions, ravaged by poverty and greed, governed by tyrants and thieves, threatened with drought and disease.   And yet Alberto and his sculptures seem to me an apt representative of the heart of his country.  For here, hidden in the ancient hills, is a symbol of the hope, beauty, and ingenuity of the Nicaraguan people.