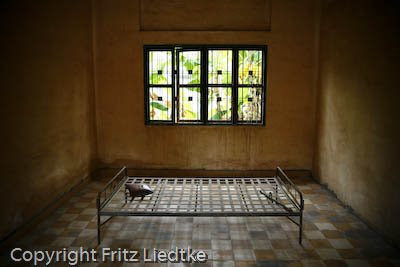 Seth decided we needed to see The Killing Fields, and Tuol Sleng Prison. He was right: if we’re going to know Cambodia, you can’t skip the atrocity. The nation’s psyche has been formed by 30 years of it. It plays right into some of the causes of child sex slavery and human trafficking.

We spent a couple hours at Tuol Sleng, a former school compound, where the Khmer Ruge imprisoned, tortured, and murdered approximately 12,500 people in 4 years. Only a handful ever made it out alive. Most people were bludgeoned to death with shovels and other implements, usually by captors who were 10-15 years old. Men, women, children, young and old, were brought here, photographed, their history recorded, then tortured and murdered. It staggers the mind. It becomes hard to breathe. 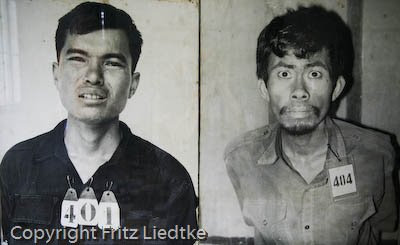 The rooms full of photographs ask so many questions of the viewer: why these people? Why these mothers with their babies? These children? (These were my contemporaries, my age in the mid-to-late 1970s.) Why were the captors so vigilant to photograph each one of them? Their Nazi-like records seem such a waste: why document what you intend to eradicate? Their methods of chained imprisonment, torture, and physical murder make the European concentration camps and gas chambers look humane. 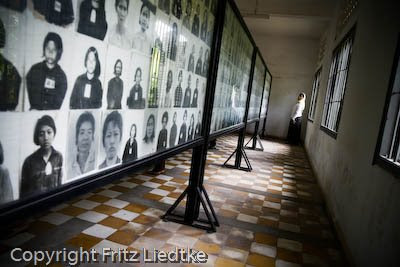 The photographs are beautiful. Many are even well-composed and beautifully lit. Who were the photographers with their TLRs? Why did they put such care into some of their images?

Perhaps the most vivid, moving rooms are the first we visited. They are small classrooms, some with green chalkboards still on the walls. In the center of the room is a single metal bed. A chain or shackle. A shovel. And a photograph on the wall of what the Vietnamese emancipators found: 14 bodies, one on each bed, recently tortured to death, blackened and bloated. The rooms are silent, yet they speak.