People on the Streets in Bangkok 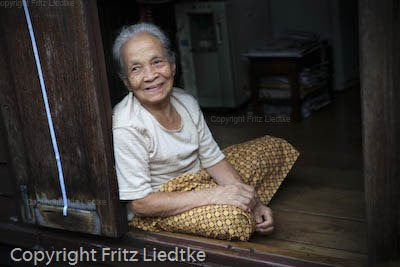 I’ll post an amalgam of images from Bangkok here, with accompanying notes. Much of these were shot while walking the streets with Iven and Kashmira. I was grateful (and a bit in awe) that they spoke Thai; and frequently, the locals were also surprised to hear their native tongue on the lips of a couple of white folks. We stopped and chatted with people frequently, including this beautiful grandmother above. 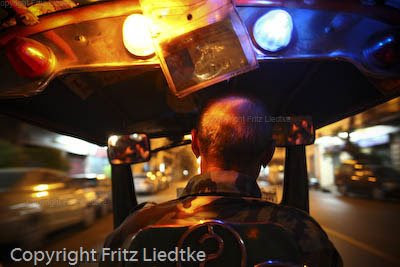 Tuk-tuks are a way of life in SE Asia. These little motorized carts (in Phnom Penh, they are like a burro and cart, except that the burro is an overworked motorcycle) take you wherever you need to go, for relatively cheap. The drivers are quite industrious, to the point that you literally cannot walk more than about 10 yards, or appear out of any doorway, without at least one guy saying, “Tuk-tuk, sir?” 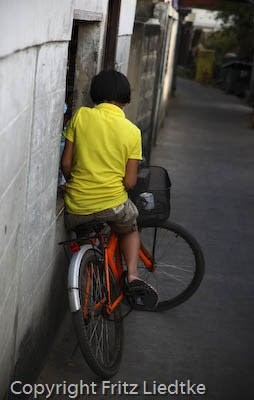 One of my assignments while in SE Asia was to photograph images that in some way show Buddhism in the modern, urban context. One of the most visible and prevalent forms of this was the amulets and good luck charms found everywhere, especially in taxi cabs.

Not only was I blessed with the purchase of a new Canon 5D MkII just before leaving for this trip, but the good folks at LensBaby also sent something with me. They graciously offered to lend me their new Composer lens, which is their best invention yet. I shot some stills with it (such as this one, above, at a park in Bangkok), but was most excited to use it for some of my video work.

People in Bangkok can, and do, sleep anywhere and everywhere.

A young lady working the streets in the middle of the day.

This gardener cares for the landscaping along one stretch of a canal in Bangkok. Iven had me photograph some of the signs that he put up, that clearly indicated where the tuk-tuk drivers who stop by should and should not pee. He was tired of them killing all his potted plants.

One of the hilights of Bangkok life are the street vendors, which are everywhere. You can buy everything from fresh-cooked meat on a stick (deliciously marinated), to coconut ice cream, to fried bugs. The papaya we were purchasing from the vendor above cost 10 baht, which is about 27 cents.

Well, this isn’t on the streets of Bangkok, but in the airplane on the way over.

My last night in BKK consisted of walking the streets late at night with Iven and Kashmira. We stopped by this street vendor, whom they know, and chatted for a few moments. She didn’t like the pictures I took of her (she was 50, and didn’t like how old she looked), so I took one last shot of myself with her. Notice the artificial flower behind my ear, which was her gift to me.