So this is how it begins: A week before we’re to leave, the Bangkok airport is overrun by protestors, shutting it down. Still locked down the day before we leave, our flight is cancelled. I search and search for alternate flights, and, miraculously find one: a flight to Phnom Penh, Cambodia for the same price as our previous itinerary, for the exact same dates. All other date combinations are $600-2000 more. I book it 15 hours before we leave. A week of uncertainty about our itinerary finds closure. I finish packing.

Well, here we are, high above the Pacific, 6 hours into an 11 hour flight from SFO to Seoul.

In spite of only 3 and a half hours of sleep last night, and in spite of Tylenol PM and melatonin, I’ve not slept much. The screaming baby hasn’t helped. To my right, a Chinese-American man sleeps in front of a Meryl Streep musical. To my left, Seth sleeps off and on. He’s only arisen from his seat once in the last 6 hours. He also hasn’t thrown up in about 12 hours, so we’re making progress.

I woke up at 3 am this morning, unable to sleep. About 4:00 the phone rang, but when Shannon answered, no one was there. I was still awake at 5 when the phone rang again. Marlo was on the phone, telling us Seth had spent the night in the bathtub, with vomiting and diarrhea. He wanted to see if I could reschedule the trip a few days out. I said I’d try, and called the insurance I’d booked with our flight, but they said they’d pretty much only refund our flight costs, not pay for a reschedule.

I looked at Shannon, sitting on the floor in my office, and said: I don’t know what to do. Except call Marlo back.

When she got on the phone, she told me Seth was in the shower, and they were going to head to the airport. If he didn’t pass out on the way to the airport, he was going. That was good enough for me. I laid down for another 20 minutes, then we prepared and left.

Seth was moving slow, but moving, when he arrived at PDX. I got us all checked in, and we boarded the plane. As we sat there, waiting for the plane to load, he got quieter and quieter, picking up a paper barf bag and eyeing it. A few minutes later, as we backed out of the terminal, he slumped over, dropped the barf bag in his lap, and started to retch.

“Seth, pick up the bag!” I said, pounding his arm. No response. “Seth, use the bag!” Still no response, just two full-on retches, spraying vomit all over himself, the seat back in front of him, and the paper bag sitting idly in his lap.

“Seth, what are you doing? Use the bag.” I hit the call button for a flight attendant. Slowly Seth lifted his head, barely responding. An attendant came over with paper towels and a large plastic bag. Seth whispered that he had a change of clothes in his bag. And that he’d be fine. But for the rest of the flight, he sat there, nearly comatose, propping the plastic bag open in his lap. At one point he turned to me and said, “If I black out again, wake me up.” “I’m not sure I can,” I responded. “You didn’t respond last time.“ I sat there, watching and praying, satisfied that as long as I could see the rise and fall of his breathing in the white plastic bag on his lap, he was still with me.

It’s been an eventful 36 hours. The monotony of long distance flight is almost a welcome relief. I can’t believe we’re actually here on the plane on our way.

We made it. 30-some hours of travel, a drugged night’s sleep in our hotel room, and here we are.

Jaya, the director of Transitions Cambodia (the safe house/transitional home for girls rescued from sex slavery) surprised us by meeting us at the airport last night. We were just about to catch a cab to our hotel, when she walked up and began to ask us if we knew Fritz and Seth. I recognized her immediately from Transitions’ video (online on their website), and we were all very excited to meet each other. She introduced us to Meing, one of the house moms, as well. She told us her story as we drove by cab to our hotel.

Today we’ve rested and eaten well, figured out where to store/hide/lock gear, and hydrated ourselves. Then we started walking, exploring the city, learning how to dodge cars, cabs, motos, and tuk-tuks as pedestrians: look both ways, walk at a consistent pace, don’t get killed.

I start photographing right away. 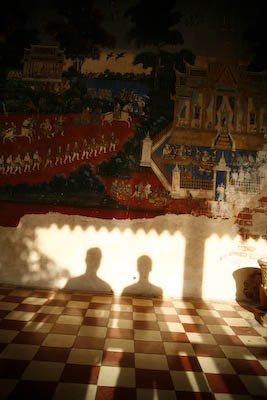