This month’s installment of Faces and Fashion on Alberta, coming to you live from the evening of the Democratic Convention. A few TVs on the street and lots of people crowding into bars during Obama’s speech. Which is why this first image is so appropriate: 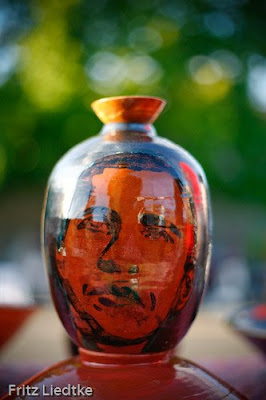 And this one also, of Christophe. “I felt like exercizing my freedom of expression tonight.” 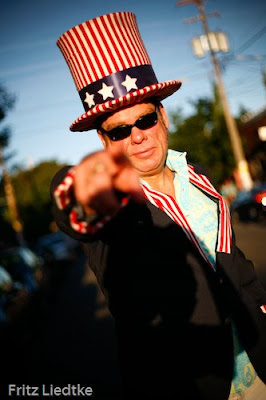 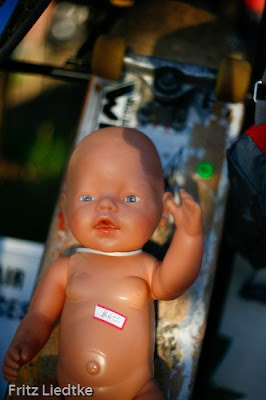 Lauren Portinga and Brent told me they thought people could use some hugs, because “people aren’t as friendly here as they are in some places.” They took their inspiration from the Free Hugs Campaign. (Take the time to watch the sweet–and frequently hilarious–Free Hugs Campaign video on YouTube. It’s actually quite moving.) You’ll notice a couple other Free Huggers in an image at this post from London’s Hyde Park in the spring.

This was the first evening ever that the Alberta Street Last Thursday had the streets officially closed to traffic. The whole event was ‘staffed’ with volunteers explaining things to people, including this gentleman.

Kelsey Robertson is an artist. She had some paintings out for sale, her first time doing so on Alberta. She seemed pretty content to sit in the car and draw.

Tito and Emma were tied together at the foot, just because they felt like it.

If you stroll the street regularly on Last Thursday, you’ll recognize Rabbit’s mini bus parked there, usually used as a stage for hula hoopers. She actually lives in the bus, which is rather intriguing.

The tall bikes were out as usual. I liked this guys riding outfit.

Musician Adam Hurst is a great and popular addition to the mile of music on Alberta. I’ve heard him play in several venues. Check out his website at www.adamhurststudio.com. He does beautiful work.

Darcy Lee is an artist and substitute art teacher. She showed me a bunch of fun line drawings she does while substitute teaching, of her students. Lovely, flowy lines and shapes. (You can see more of her work at http://www.myspace.com/darcyleeart.)

Last but not least, there’s McKenzie Wharton, the rather animated human mannequin. “My sister’s selling stuff. I’m just doing entertainment.” And entertaining she was. “Press my nose!”

All photographs and content is Copyright Fritz Liedtke. Please do not copy or re-use them. To do so is a violation of federal copyright law, and will be prosecuted.
Tags: Alberta Street | Portland Oregon Photographer | Street Photography
Facebook Share|Tweet Post|Email Post|Contact Me
show hide 1 comment